Halftone printing is a technique for printing continuous value using dots of solid color with varying size or spacing.

Halftones were invented in the 19th century as a way to accurately reproduce photographs in print. Ink can only print one value (black or white), but halftones introduce the illusion of continous value with the size and spacing of dots. 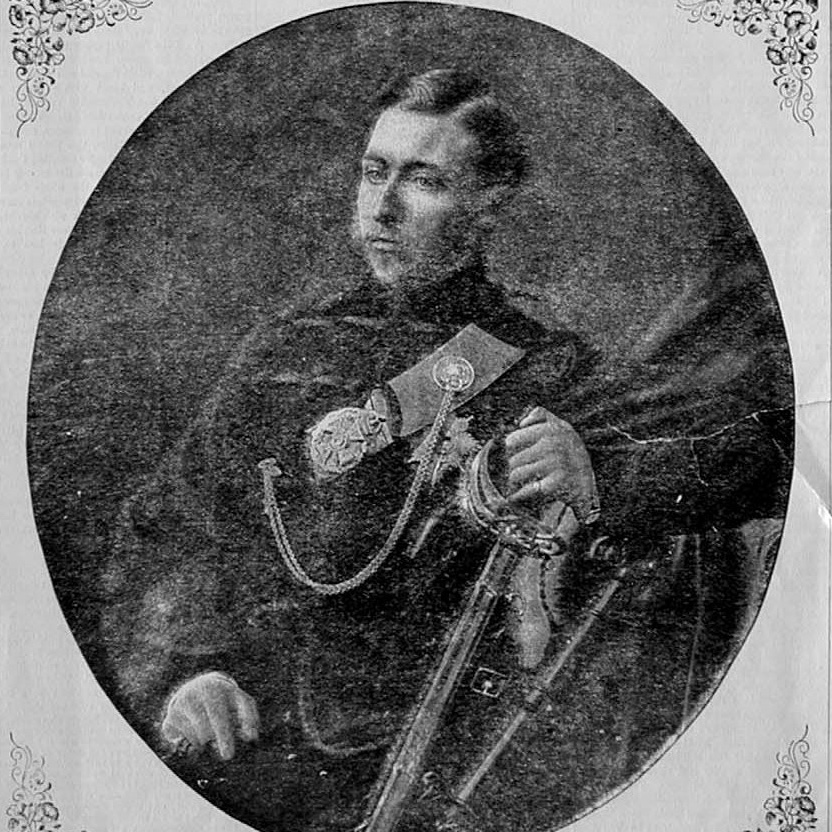 The first halftone print, a recreation of a photograph of Prince Albert from Canadian Illustrated News in 1869. The density of printed dots creates continuous value.

Additionally, by printing different colors of ink through layered halftones, it’s possible to create the illusion of the color of the original image. 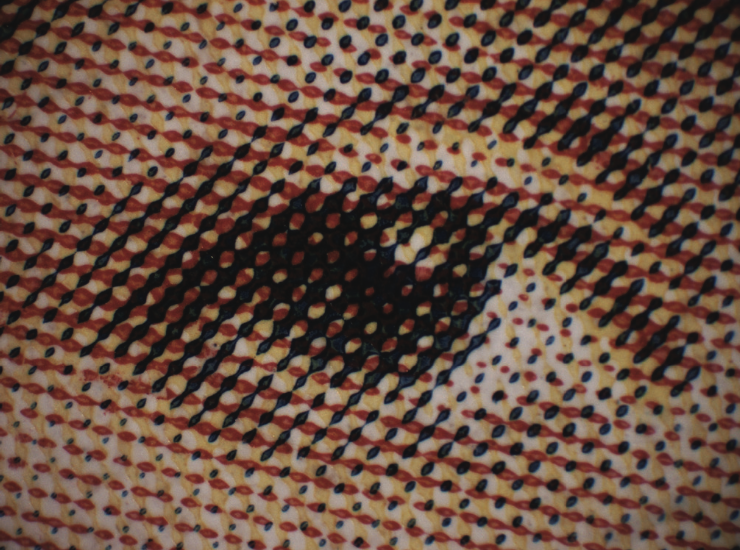 This article is meant to be illustrative, not a one-to-one replica of the printing process. I’m embracing the artifacts that happen as a result of trying to imitate it. The images generated here may appear differently based on the device you’re using.

Traditionally, halftone screens were made by exposing high-contrast film through a mesh screen, which would create dots on the film. Here, we’re going to imitate this process by drawing circles on an HTML5 canvas.

To generate the halftone, we’ll sample the source canvas’s color data at a regular interval and draw a dot (with context.arc()) sized based on the value of the gradient at that point. The value is extracted from the 2d rendering context’s ImageData, which is organized as a flat array of [R, G, B, A, R, G, B, A, ...].

The size of the circle in the half tone corresponds to the source image’s value, which is some number between 0 and 255. In a grayscale image, the red, green, and blue channels will all have the same value, so the pixel’s value can just be taken from imageData.data[index + 0], which is the red channel of the pixel. Even when printing a color image the halftones are generated from grayscale, so we’ll be able to use this same trick later on.

Let’s look at what happens when the angle of the screen changes. To change the screen angle, the code conceptually rotates the entire screen around its center to find the positions of the dots that will need to be drawn. Because a screen of the same size as the image wouldn’t cover the entire image when rotated, the boundaries for iteration are expanded to cover the full region covered by the screen.

We’ll see later how important the angle of the screens can be when printing multiple layers.

We can also change the maximum size of dots and the resolution of dots. When we approach 1 pixel per dot, the optical illusion of the halftone begins to become more convincing.

This is the halftone function we’ll use throughout the rest of this article. It takes an:

The halftone function iterates over a 2-dimensional grid of positions where it would like to put a dot. When making a dot, it samples the source context’s image data, converts the value from a range of 0-255 to a radius, and draws a circle at that position in the target context.

Because the only way to print a darker value is putting more ink through a larger dot, darker areas of a printed image suffer from over-saturation and ink bleed. In order to maintain high detail in dark areas, multiple layers are printed using different color inks, called a “duotone.” 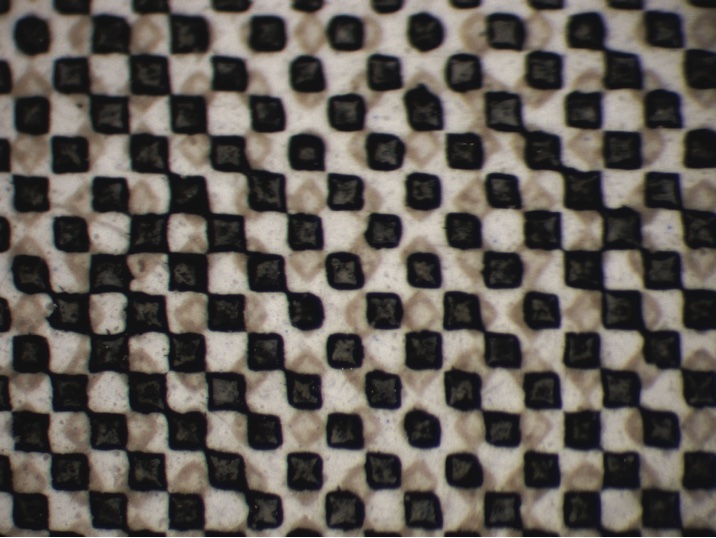 The dark areas of the image are still printed using black ink, but at a finer resolution to avoid over-saturation. A second layer is printed using a lighter ink, so when the two layers are superimposed, the dark areas appear dark while maintaining detail.

Let’s create a duotone of this still life by Goya.

First, let’s look at the result of generating a halftone directly from this image. I’m using a resolution of 3 pixels between dots and a dot diameter of 5 pixels.

The area around the grapes (?) is very dark, and we lose some of the detail of the image because of how densely the dots are packed. The bottles in the background also disappear, because the dot size is oversaturated. Let’s try to solve this using a duotone.

First, the image is split into two separate layers. The first layer contains all values, and will be printed first in a light color. The second layer contains primarily the darkest colors, and will be printed second in black. The exact distribution of value between the layers is usually controlled with a duotone curve, but in our case I’ll just split on values darker than 127.

Next, we’ll generate halftones from these two grayscale images and stack these two halftones on top of eachother, printing brown first, then our shadows second in black.

When the two screens are offset, the two layers overlap and form a dark value without making the dots too large. You can see the outlines of the bottles against the dark background and the contour of the pears.

Early duotones were produced from photographs, but ink color was chosen manually in order to match the mood of the original. You can play with that here.

When overlaying the two layers you may have noticed a distracting grid-like pattern. This is called a moiré, and we’re going to look at how to control it.

When printing two halftones on top of one another, their grid patterns will align at intervals. Let’s look at an example of two large halftones, one red and one blue. Adjusting the angle between the halftones and you’ll notice patterns emerge and disappear. Particularly, note the pattern around 82º and 12º.

In printed material, this grid can be distracting, and angles are chosen in order to eliminate it. Let’s look at eliminating the moiré with four layers: cyan, magenta, yellow, and black (commonly known as CMYK, where black is “key”).

There is no single “best” set of angles, but the angles are designed to maximize the distance between cyan, magenta and key. Because yellow is least visible, it can be comfortably aligned with cyan or magenta without producing visible moiré.

The most desirable alignments produces a specific moiré called a “rosette.” Rosettes are the smallest moiré, and occur at a high frequency in printed material, which makes them difficult to see at distance. There are a few different sets of angles which produce rosettes with different characteristics. Look closely at printed material and you can find them. 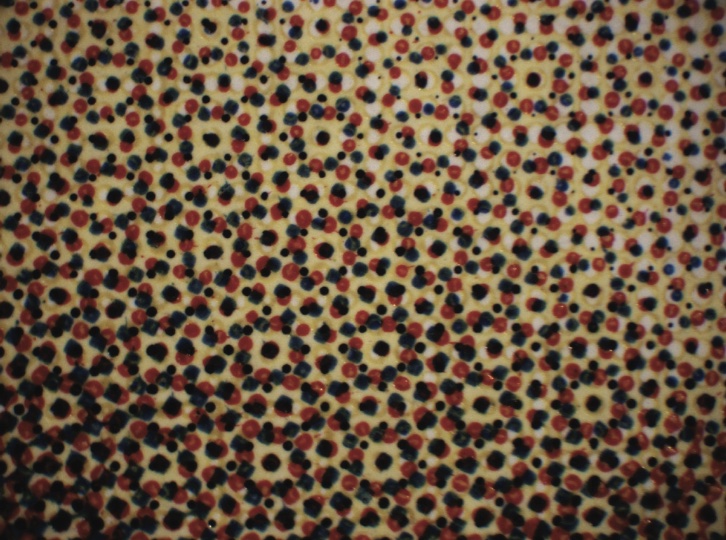 Converting an Image to CMYK

CMYK is a “subtractive” color model, compared with additive color models like LCD screens. Cyan, magenta, and yellow act as filters that absorb color from the printing substrate. Cyan is the complement of red, so the presence of cyan prevents red light from being reflected back to the viewer.

Here’s a canvas with an RGB gradient (ignore the gray that gets generated when doing RGB interpolation) and the three individual CMY half tones created from it, then those three composited.

I extract each to a grayscale in-memory canvas first, which may seem unnecessarily complex, but it’s in keeping with the practical way these halftones would be generated. Halftone generation is concerned only with value, not color, so I convert the color to grayscale then create a halftone from that grayscale.

The only bit that’s left is extracting the key, which is done by extracting the darkest value of the color. That key value is subtracted from each of the CMY colors.

There’s one last thing that needs to happen, which is complementing this value. We’re creating a grayscale image to generate our halftone from, and because dark values produce dots, we’ll want to finally take the complement of this value. For example, with our cyan channel of (255 - 126 - 129) == 0, we should end up with no dot in the resulting cyan halftone. A white value will produce no dot, so subtracting our value from white ((255, 255, 255)) will give us that result. This math can be simplified, but keeping it longform makes conceptual sense to me.

The HTML5 canvas has a globalCompositeOperation property which dictates how anything being drawn to the canvas should interact with what’s already there.

In order to simulate the behavior of ink on paper, we can set globalCompositeOperation = "darken"; which preserves the darkest (closest to zero) pixel values. For example, adding yellow (255, 255, 0) and magenta (255, 0, 255) will produce 255, 0, 0. This is how we’d expect magenta and yellow to interact in printing: yellow masks all blue light, magenta masks all green light, and we’re left with just red.

This globalCompositeOperation causes drawing to slow down quite a bit, so I’m using it only when mixing colors.

This example allows all parameters to be configured. I’ve manually chosen halftone angles that I think “look good,” which is of course my right as the “printer.”

I hope this was informative and interesting, even if it’s not entirely practical.

Halftone printing is still incredibly common, and you should now have the understanding to pick it apart. The next time you see cardboard packaging, look at the bottom and you’ll see the ink colors used to print. Take a close look at the packaging and you can find the rosettes. 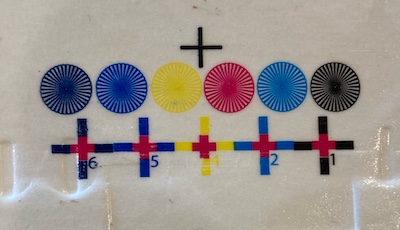 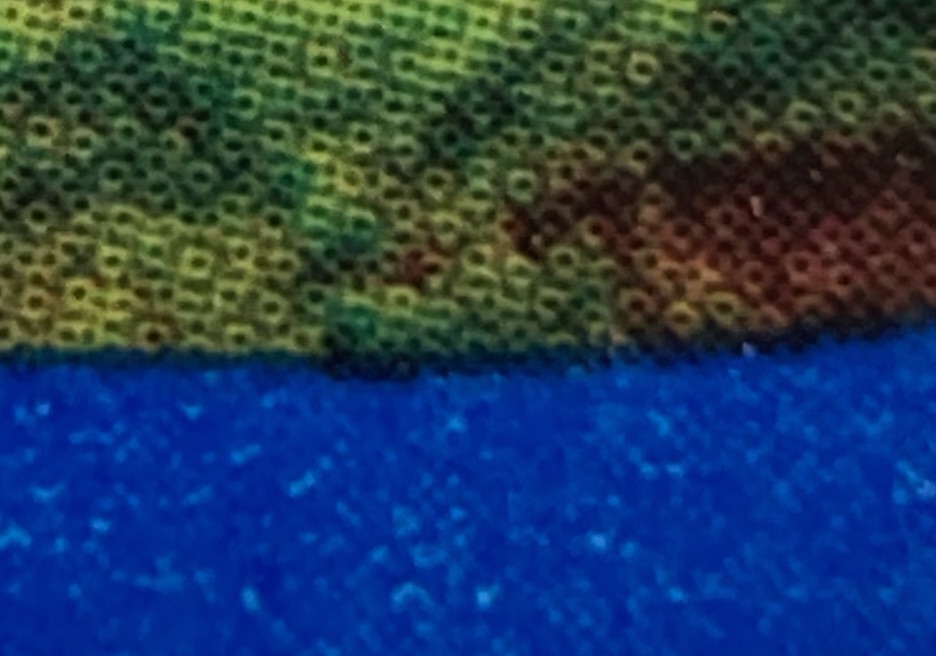 Soymilk carton from my fridge. 2022